Here's a quick and easy style option for tween girls who may want a change from their usual styles. For this style, I used a combination of cornrows and a high, twisted ponytail on top. Check out the pictures below and be sure to leave a comment telling us what you think! 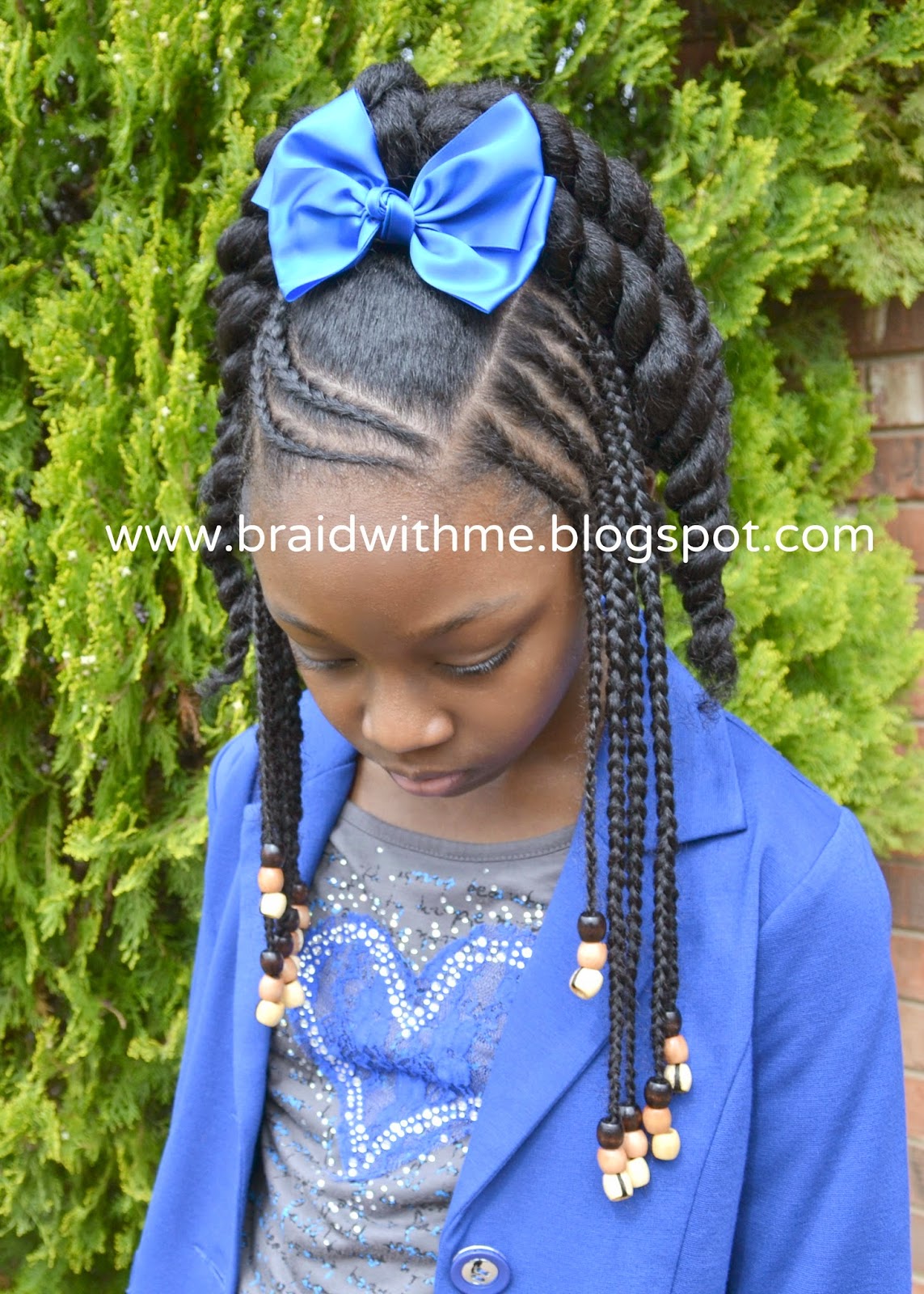 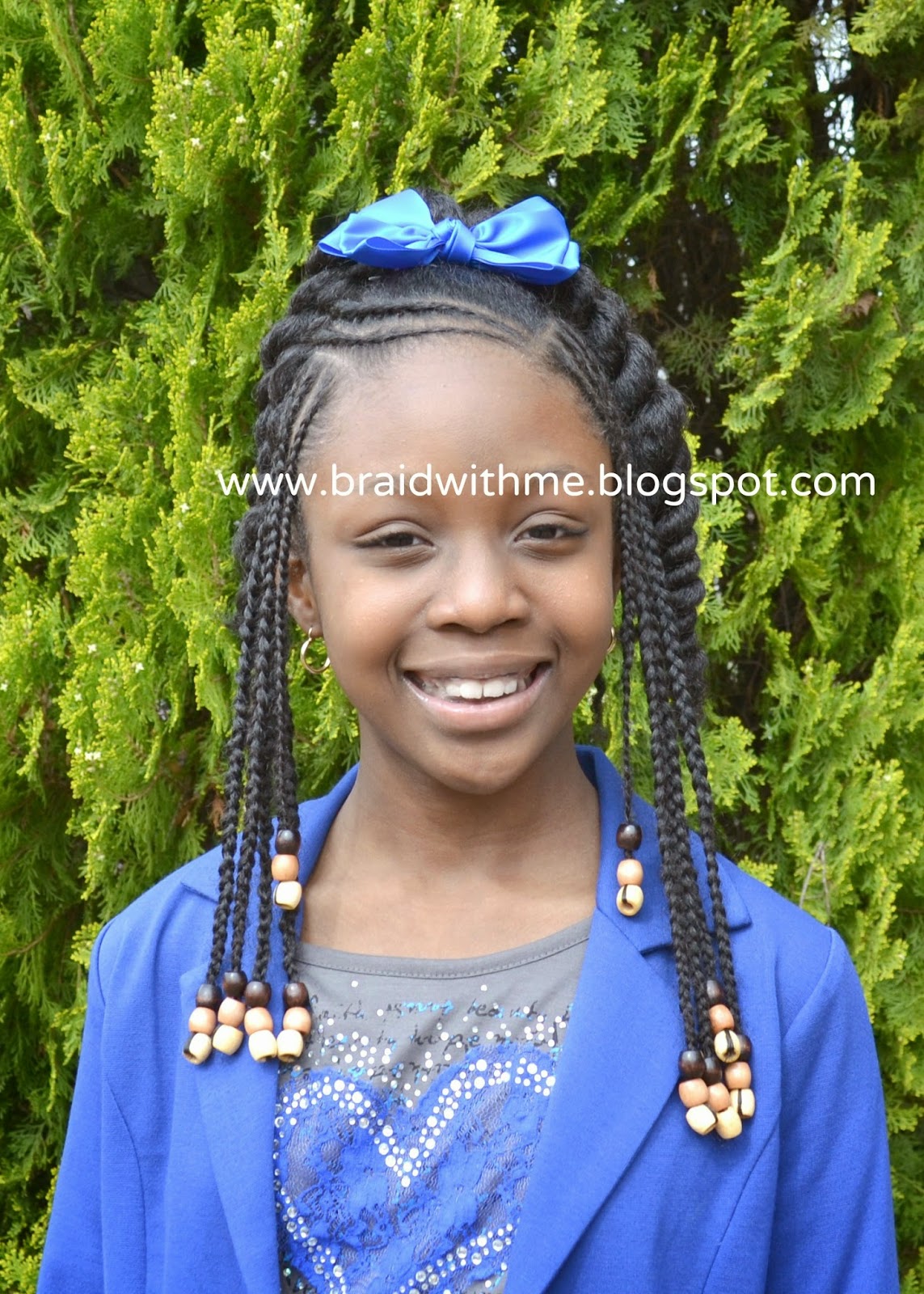 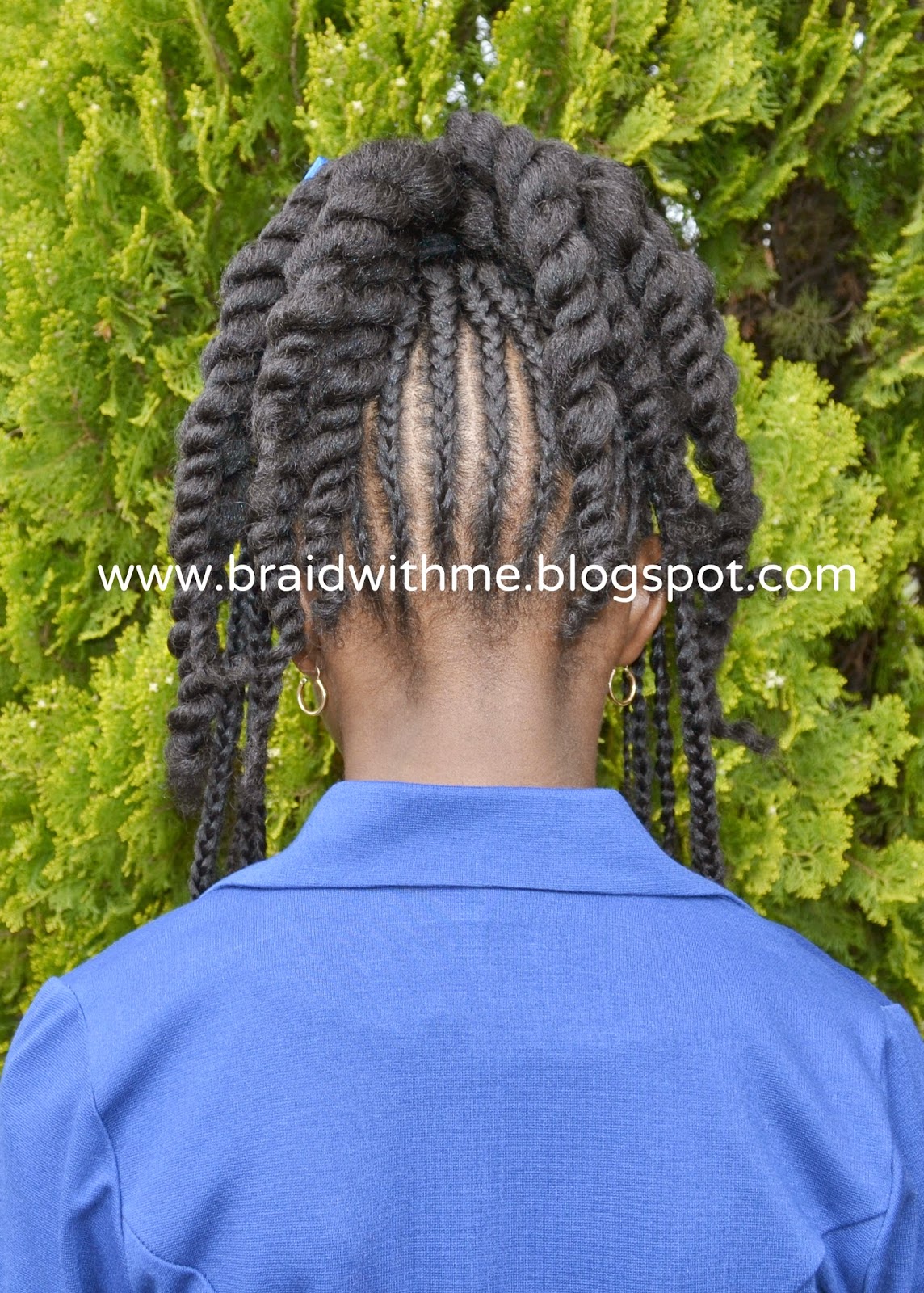 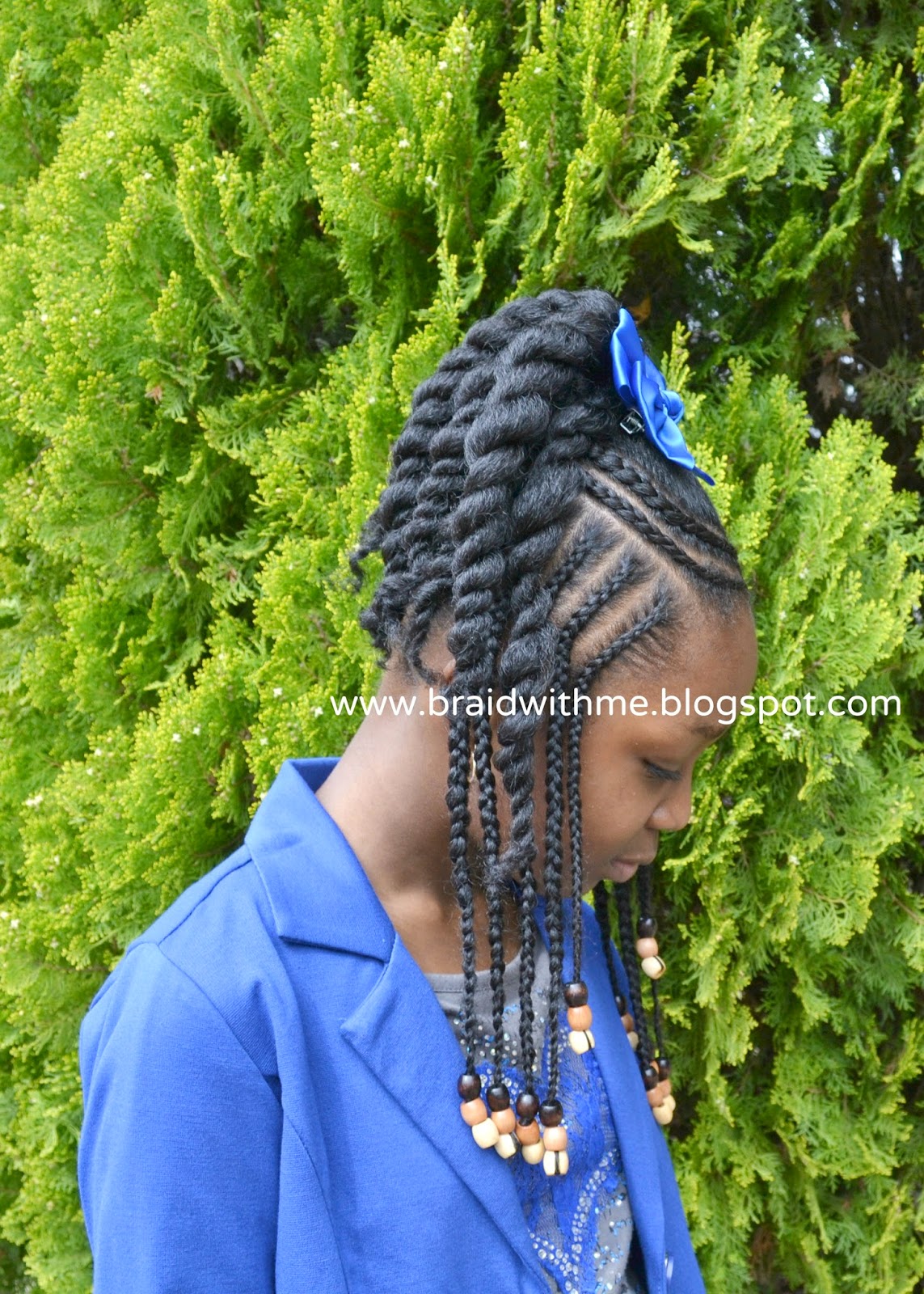 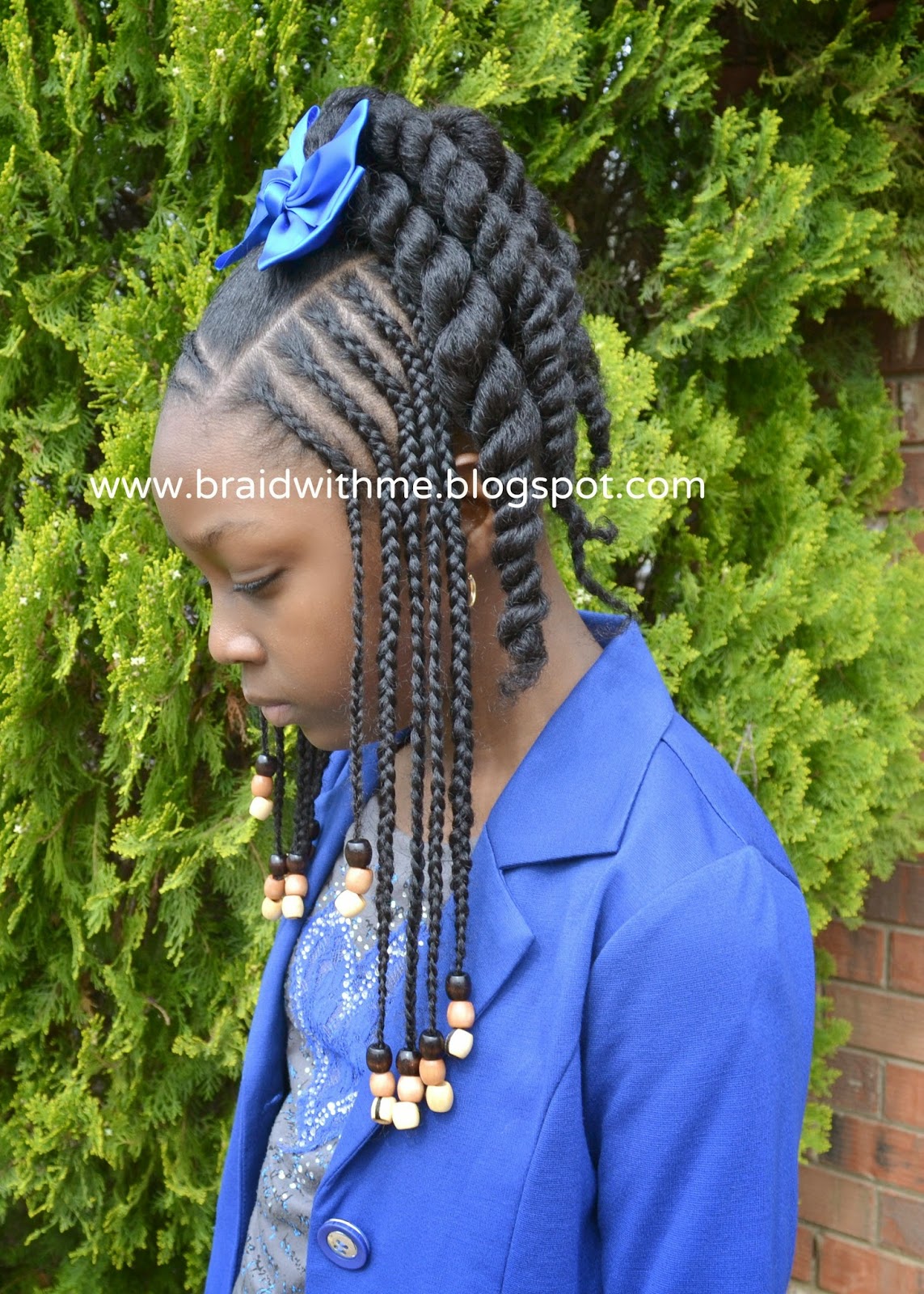 Posted by BraidwithMe at 8:55 PM 4 comments: 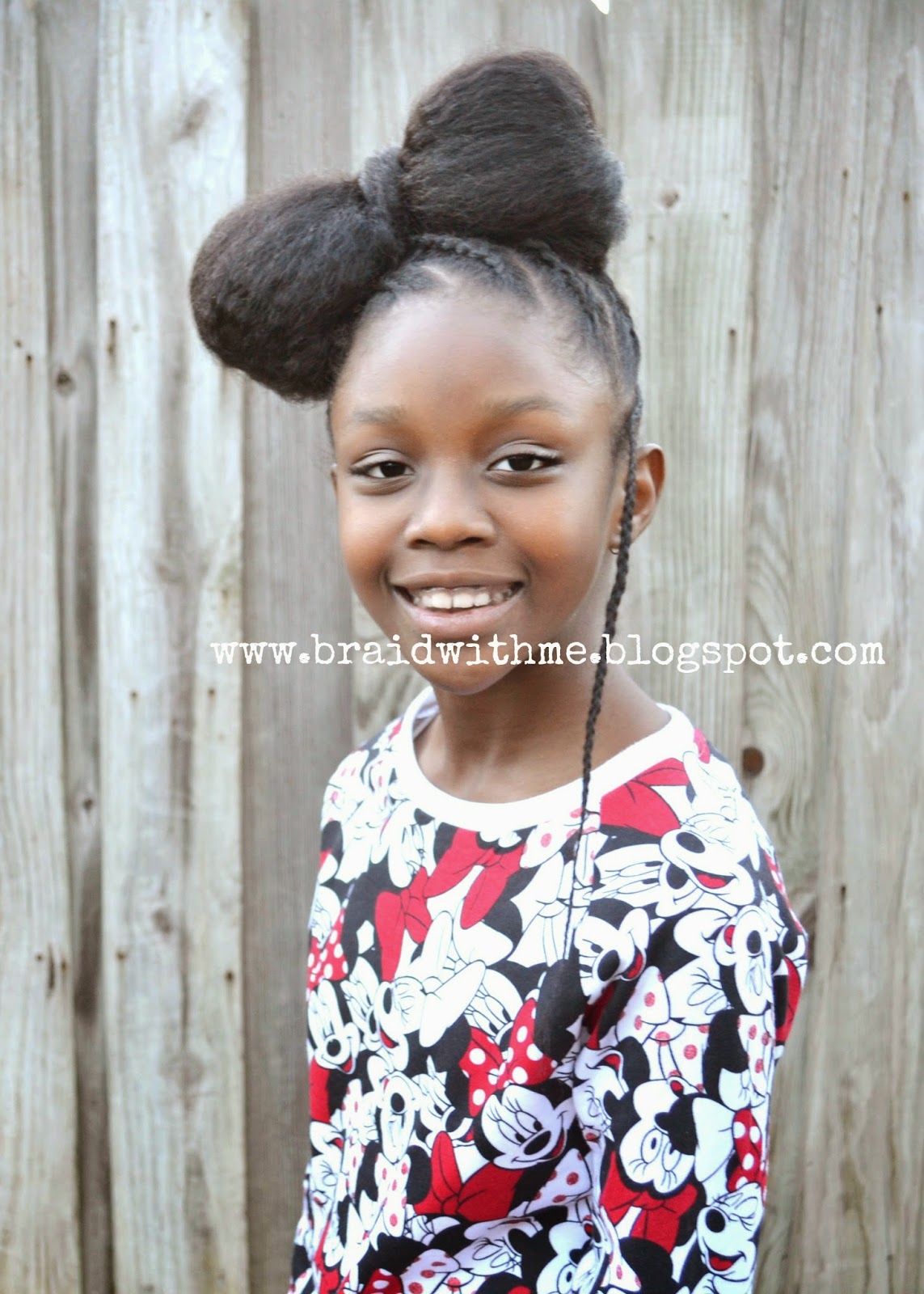 How cute is this?! After I purchased Anisa's Minnie Mouse outfit recently, a friend suggested that I do a hair bow to go along with it. I loved the idea! I knew how to create the bow but I wasn't sure about the actual style that I wanted to produce. After thinking about it for a little while, here is the result! 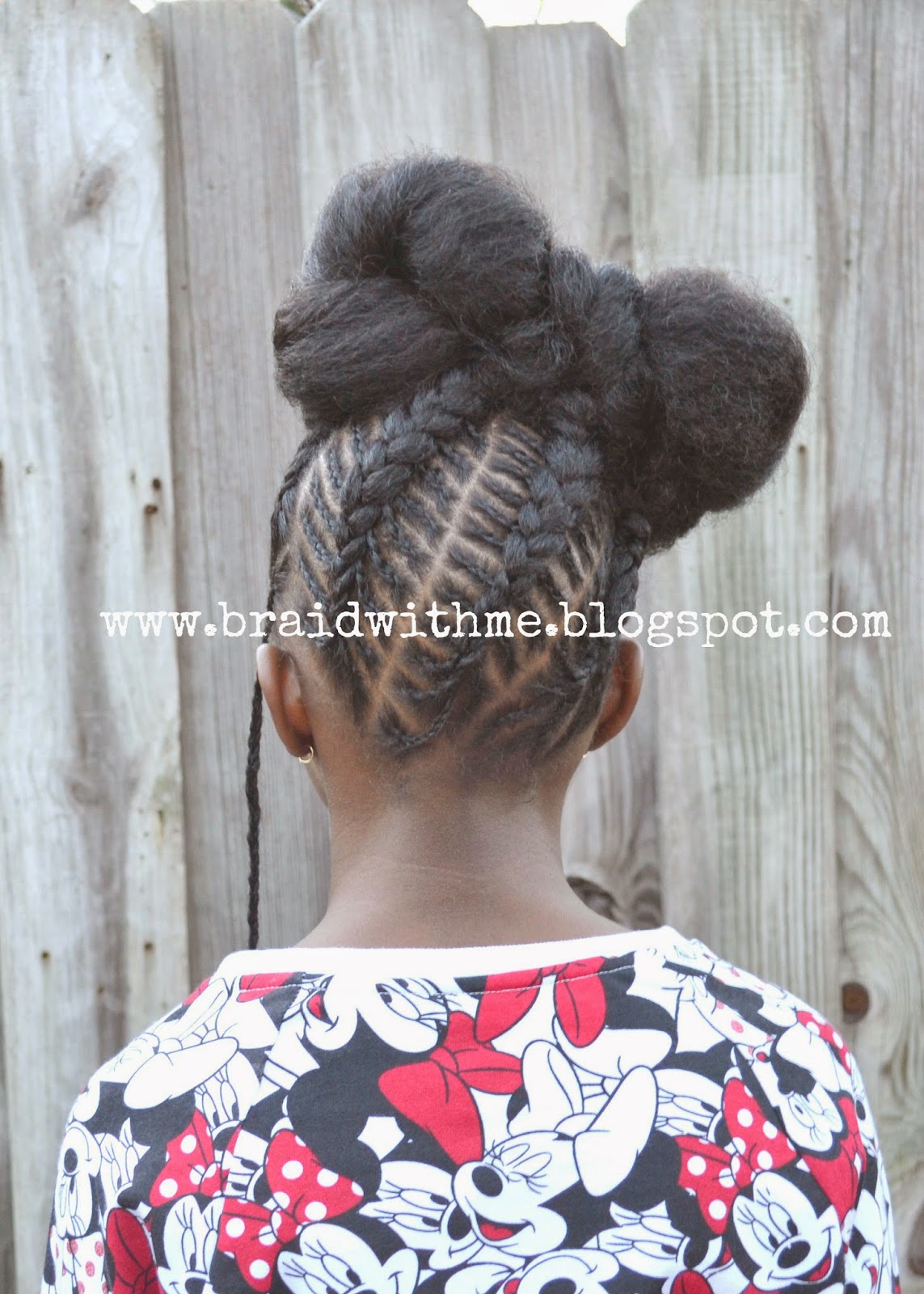 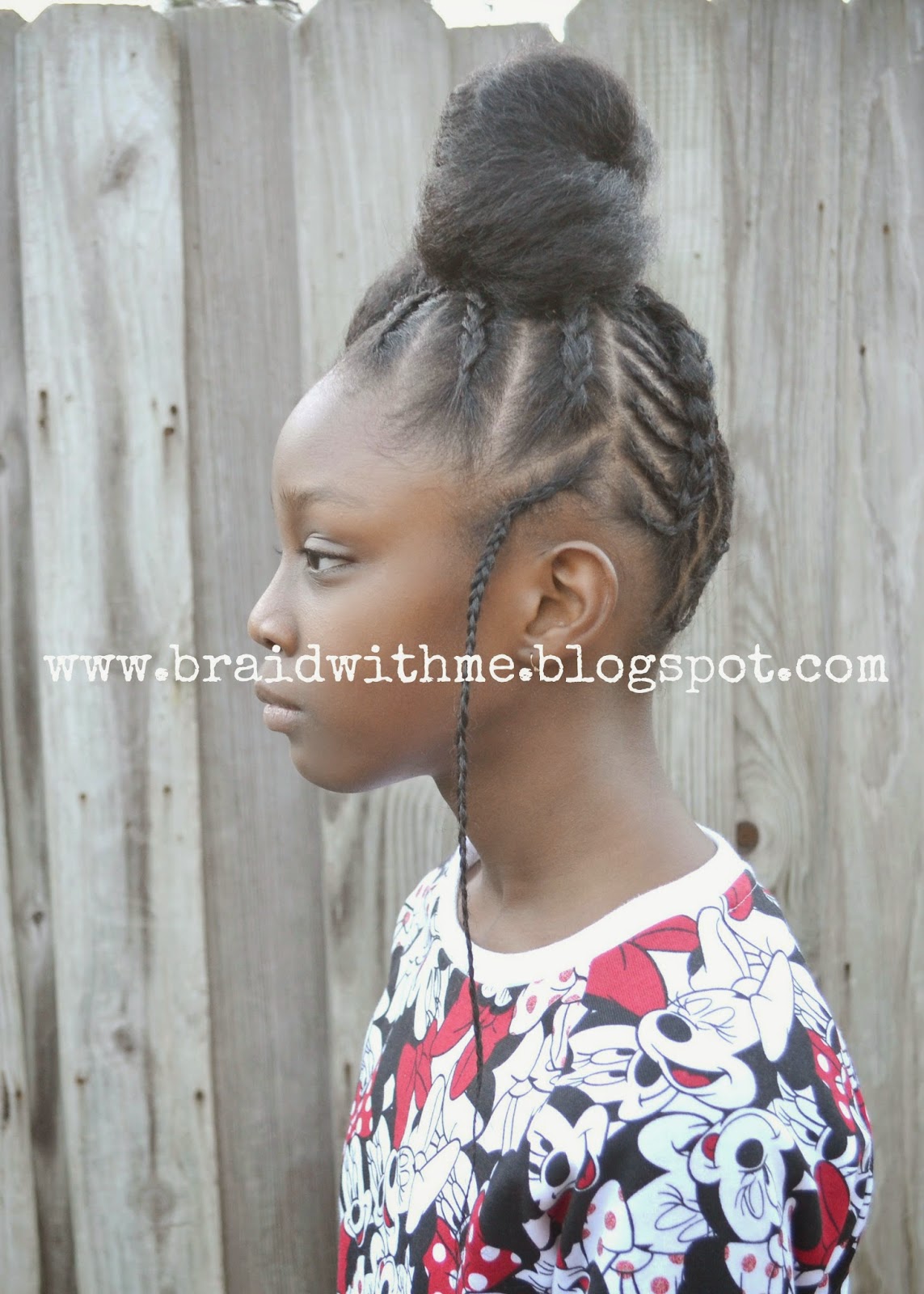 Creating the Style
I began with clean, moisturized hair that had been banded for two days. I did not use any heat to create this style. I parted her hair from ear to ear, leaving a section of free hair in the front. Next, I created the cornrows that you see in the following picture. 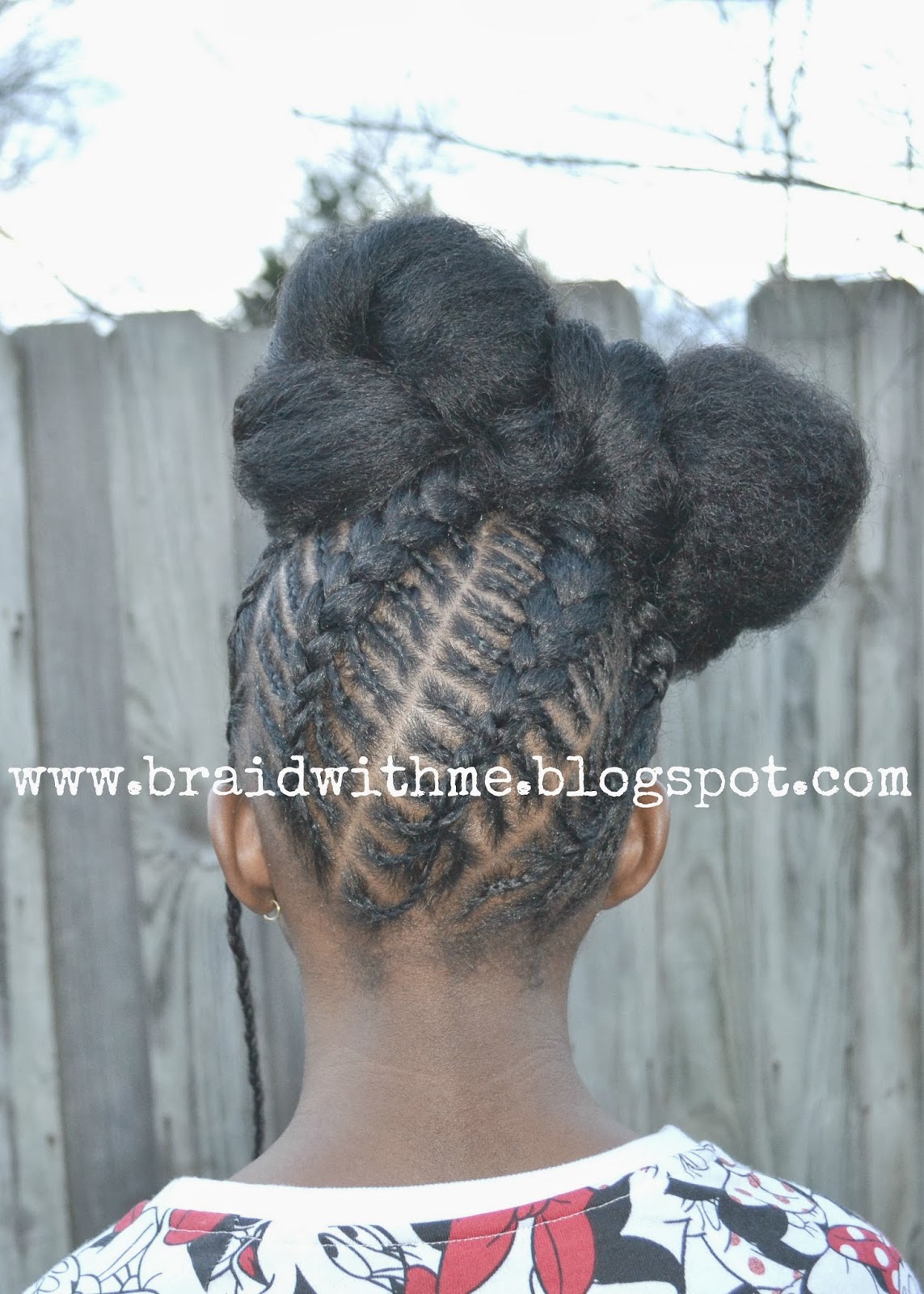 I gathered the cornrows in the back into a small section in order to work on the front. I created 5 angled cornrows towards the center of her head and one more on the side that hangs down near her ear. 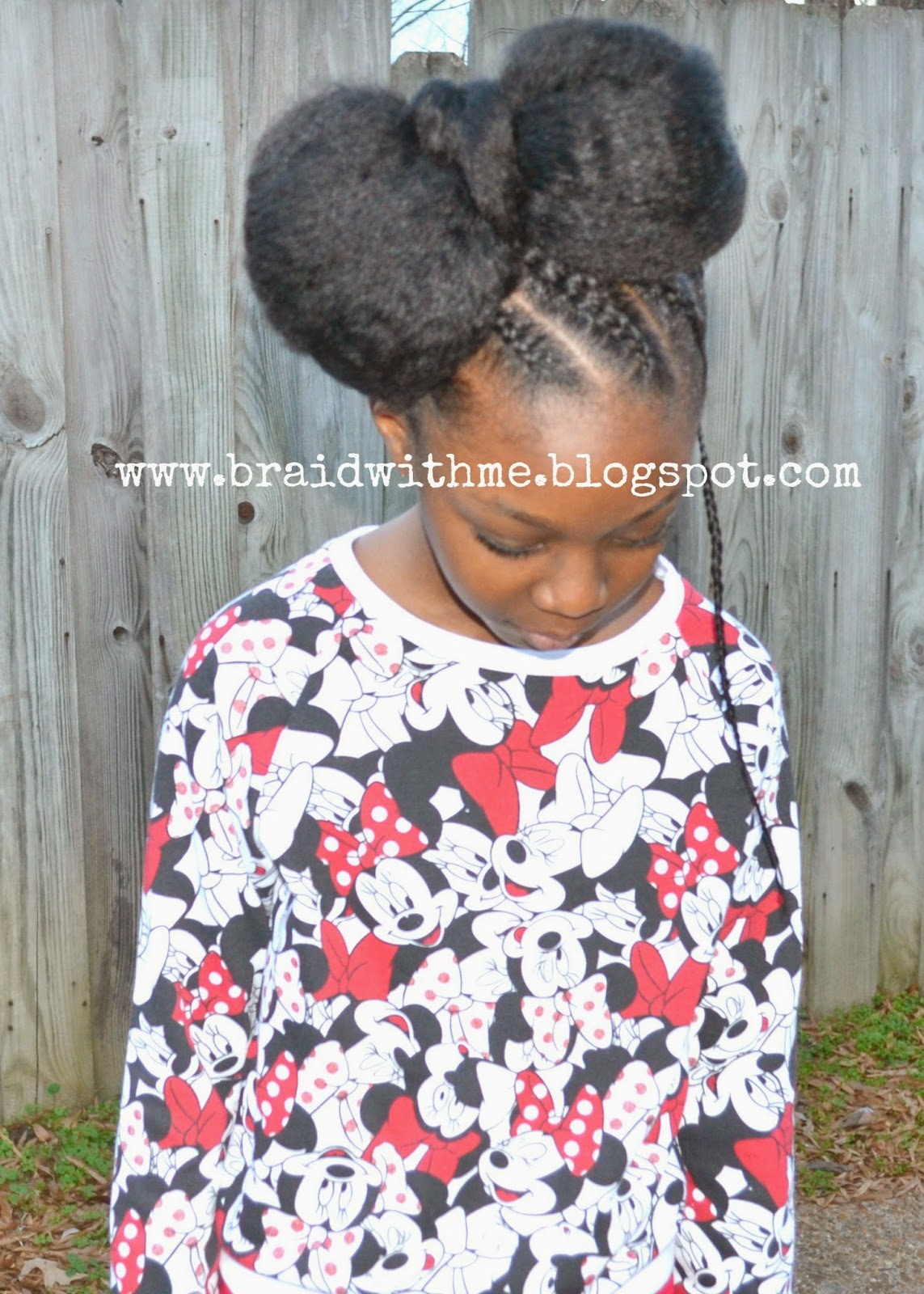 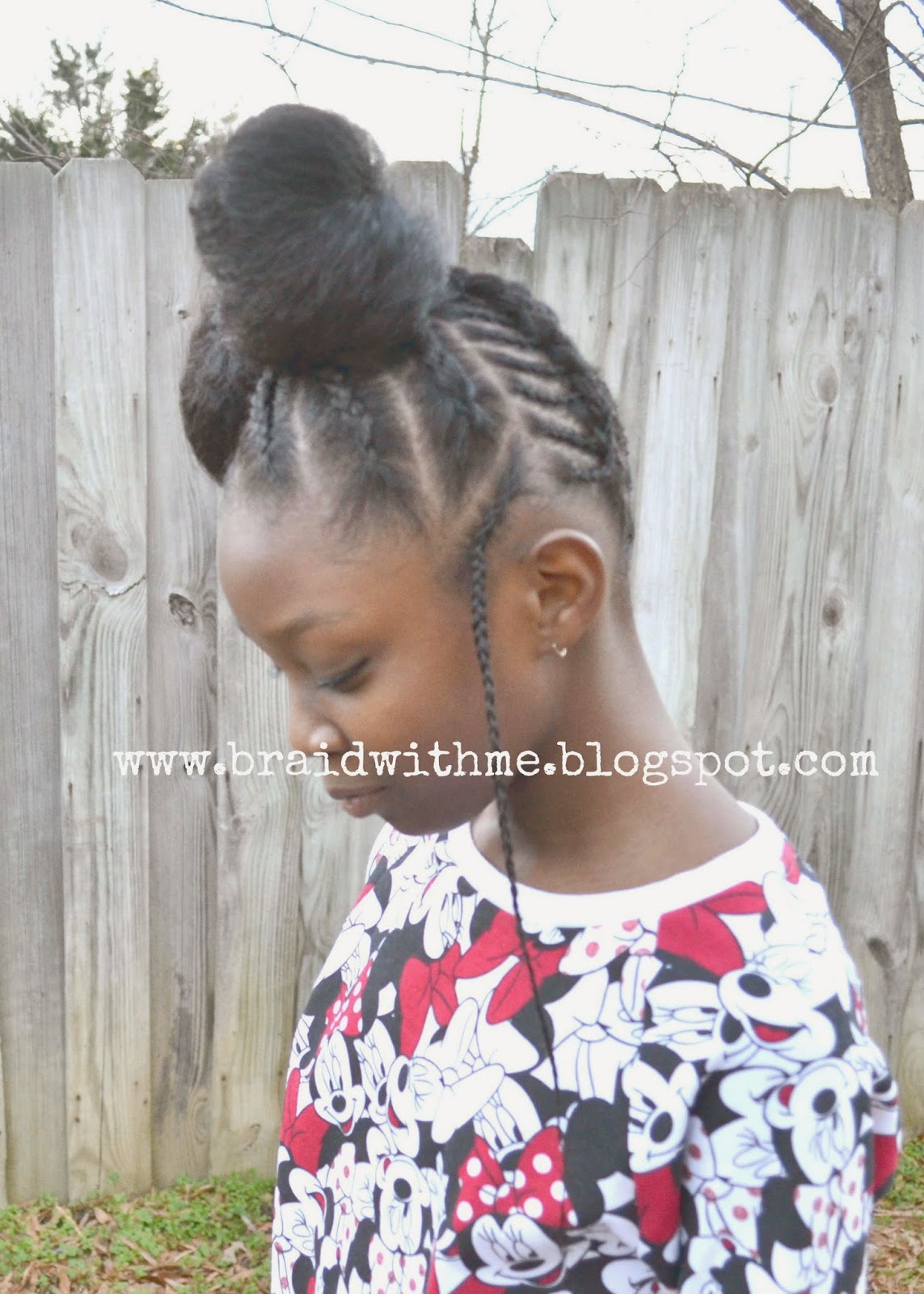 The Bow
Once the braiding was complete, I gathered her hair into one ponytail on the top of her head. Next, I separated it into two sections. I pulled a little bit of hair from one section and pinned it to the side. This small section would later serve as the center of the hair bow. I grabbed one of the larger sections, looped it around towards the back of her head and pinned it into place. I repeated this step with the other large section of the ponytail. I removed the pin from the smaller section and wrapped it around the center of the bow and pinned it into place as well. There are tons of tutorials on YouTube if you would like to see step by step instructions. 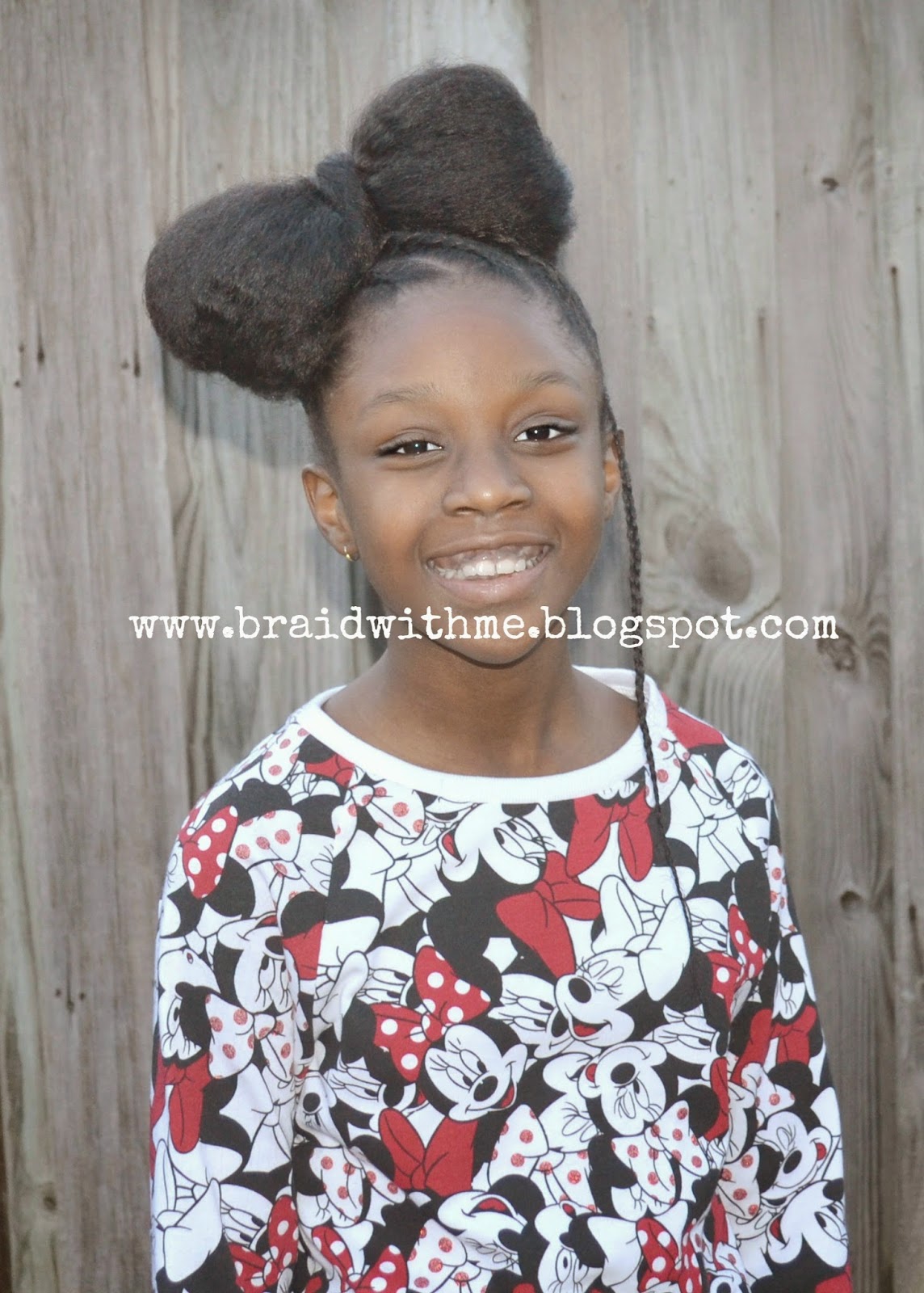 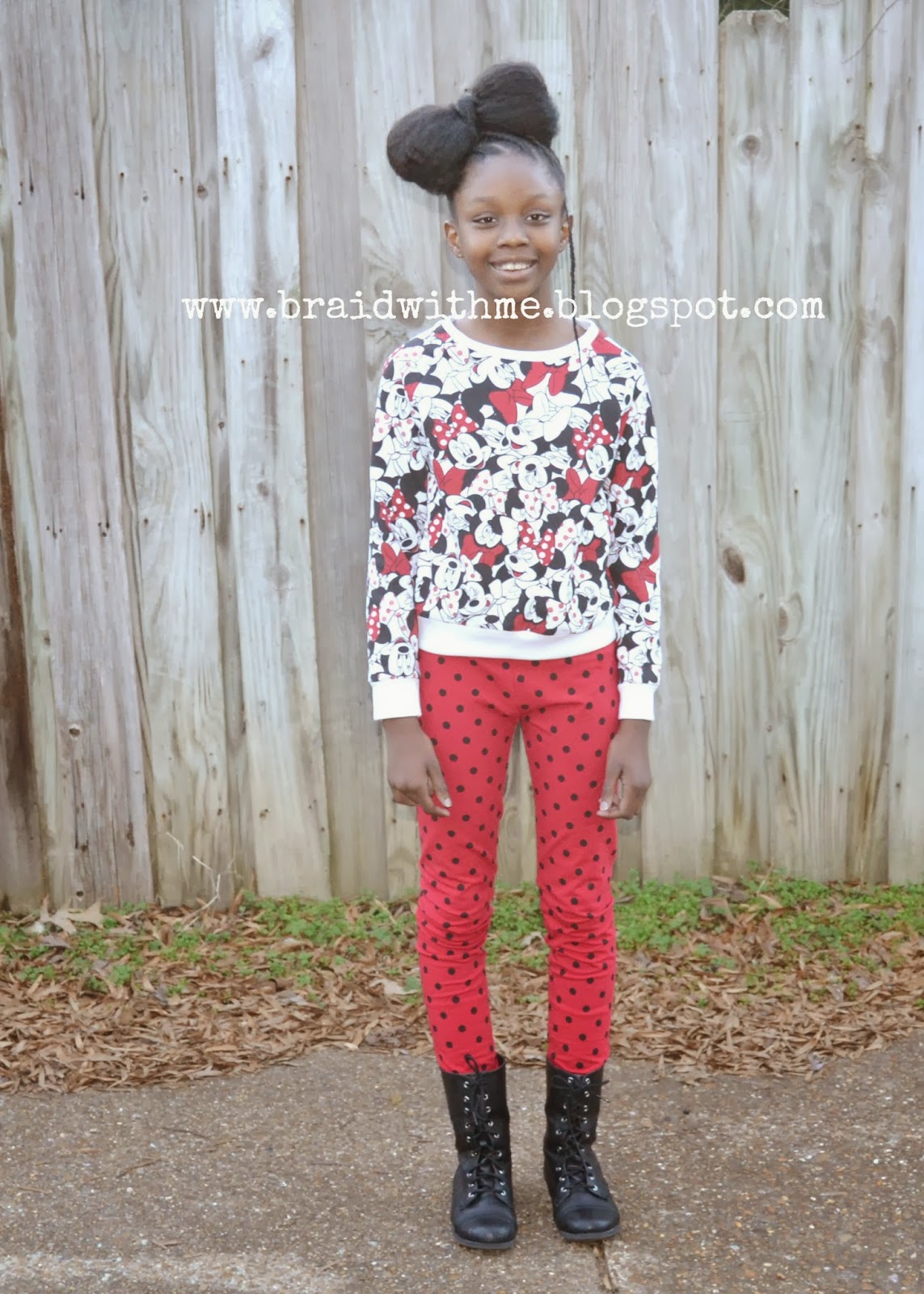 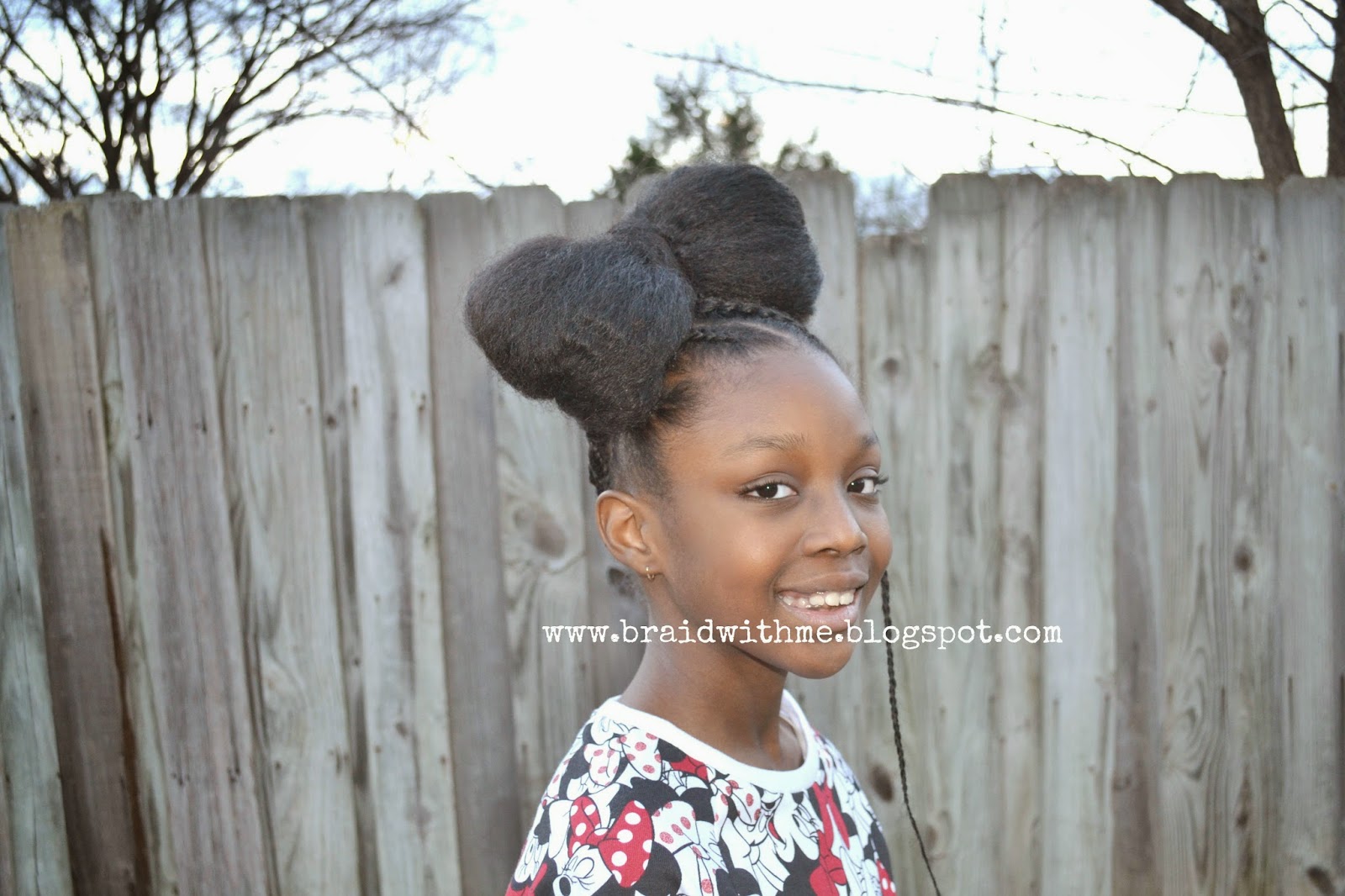 Another Option
If you aren't sure about trying the bow or if you would just like a different look, here is another option. For this look, I opted to make a simple bun instead of the bow. Her hair was still in the single ponytail on top when I created 3 two-strand twist ponytails. I looped each ponytail around and pinned it into place. You can make the bun as big or as small as you wish. 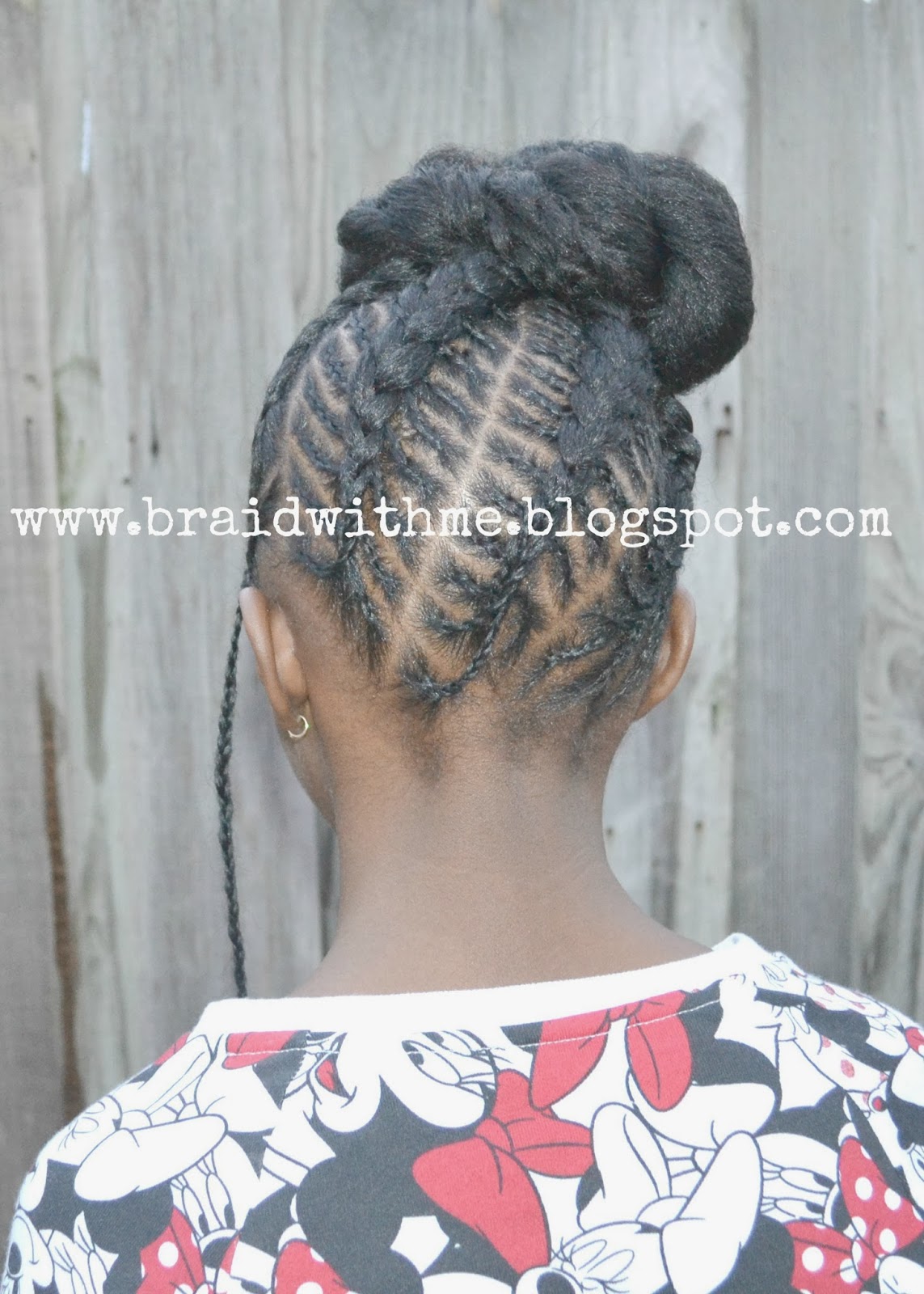 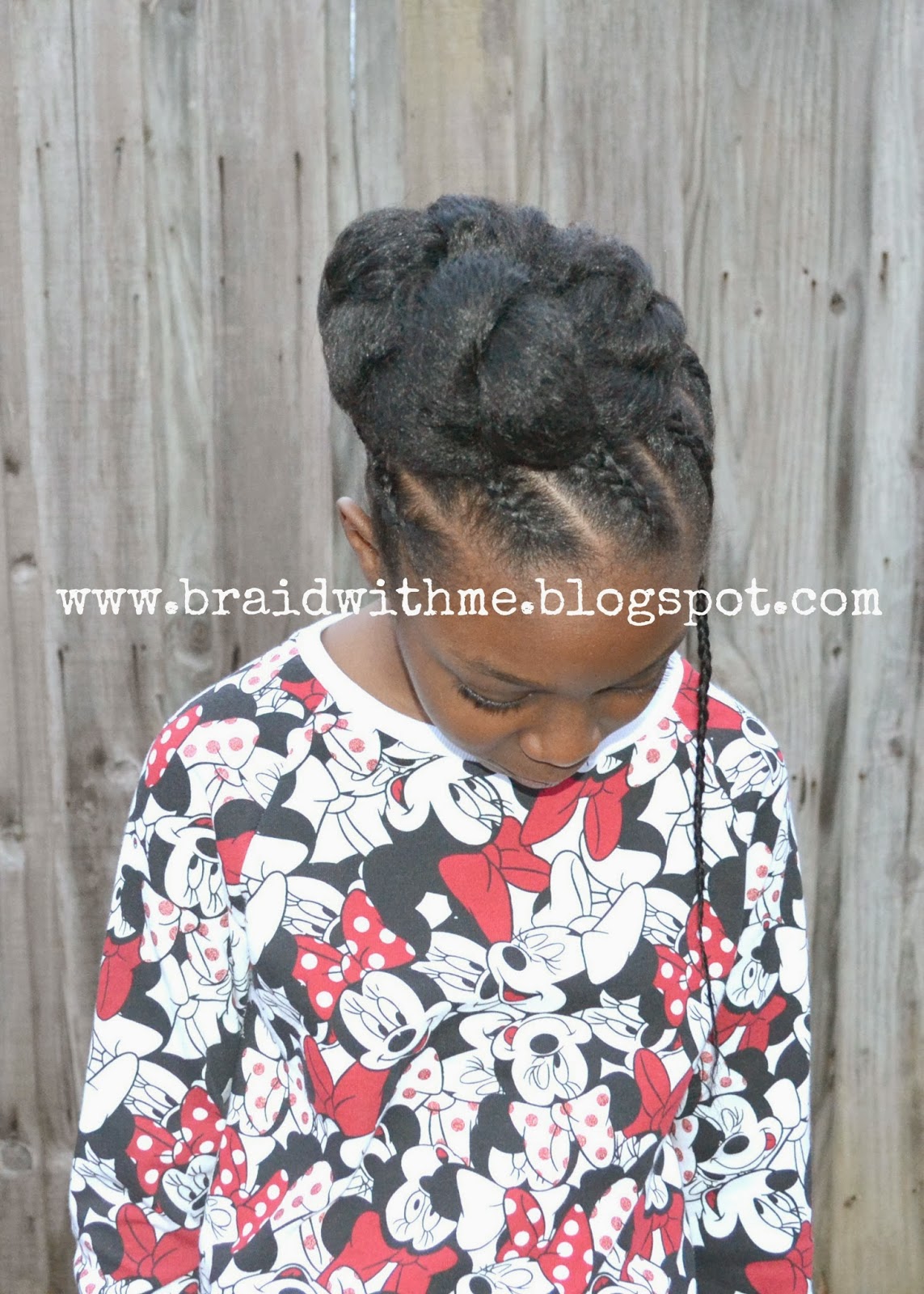 Products Used for Washing and Styling 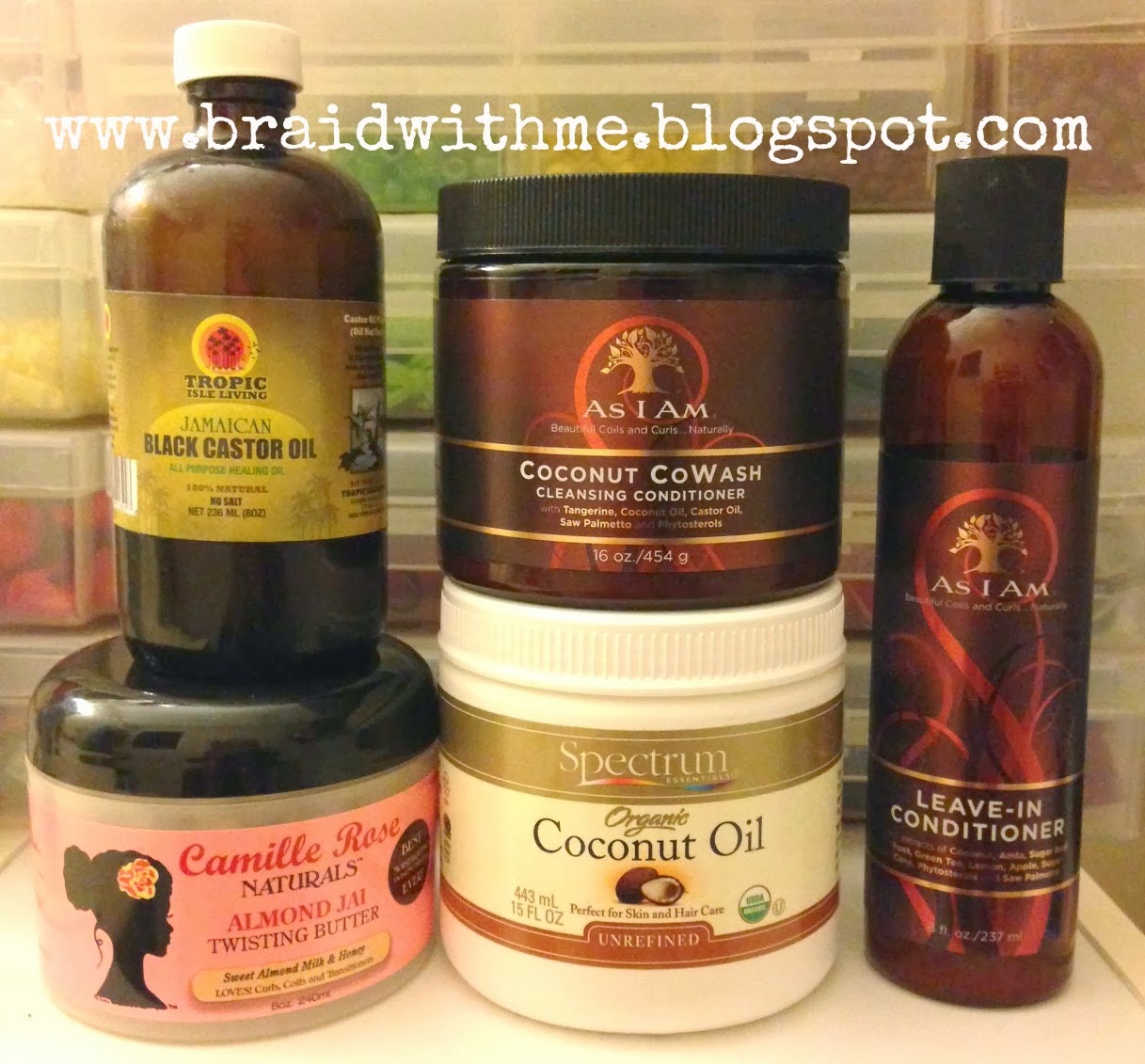 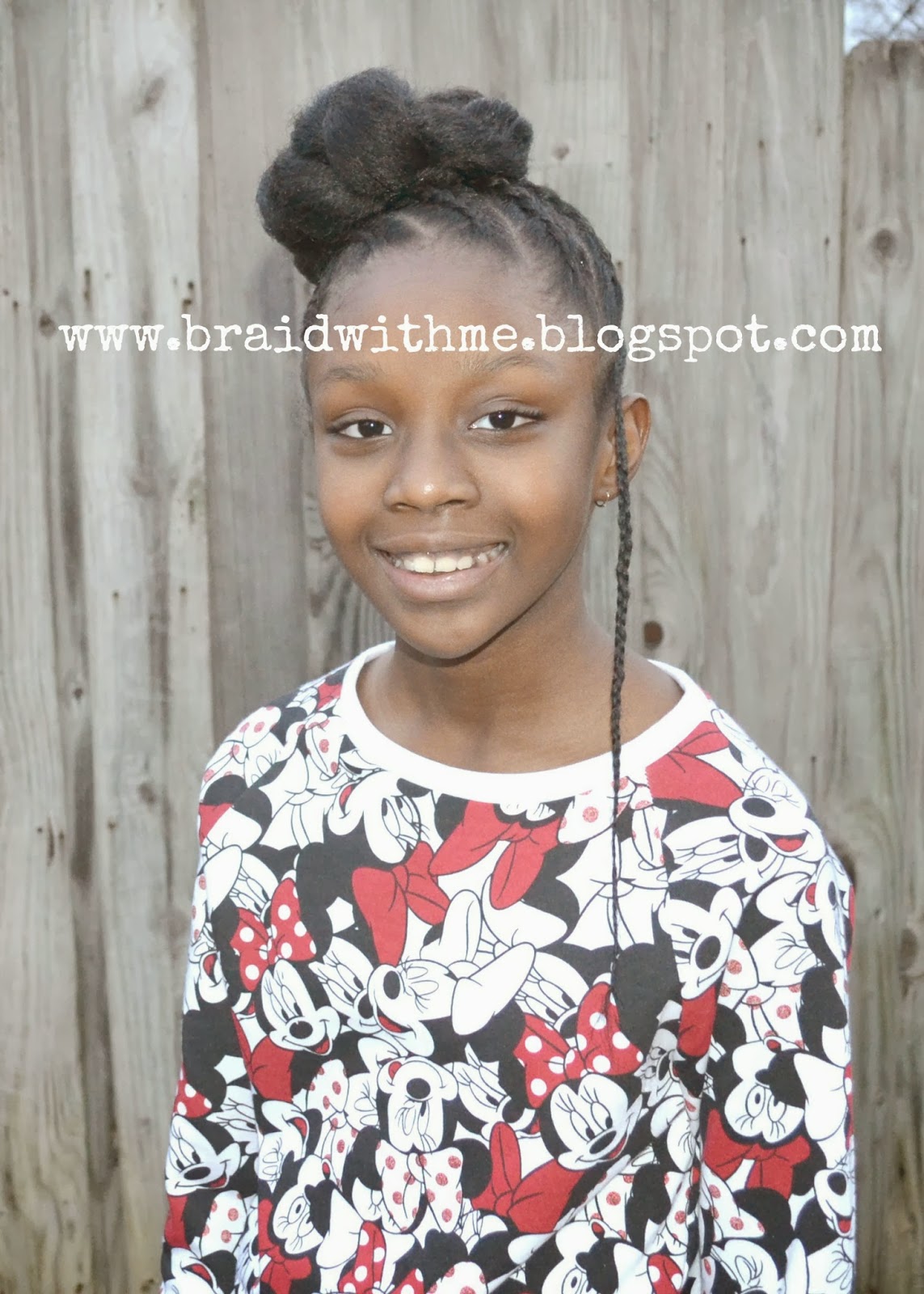 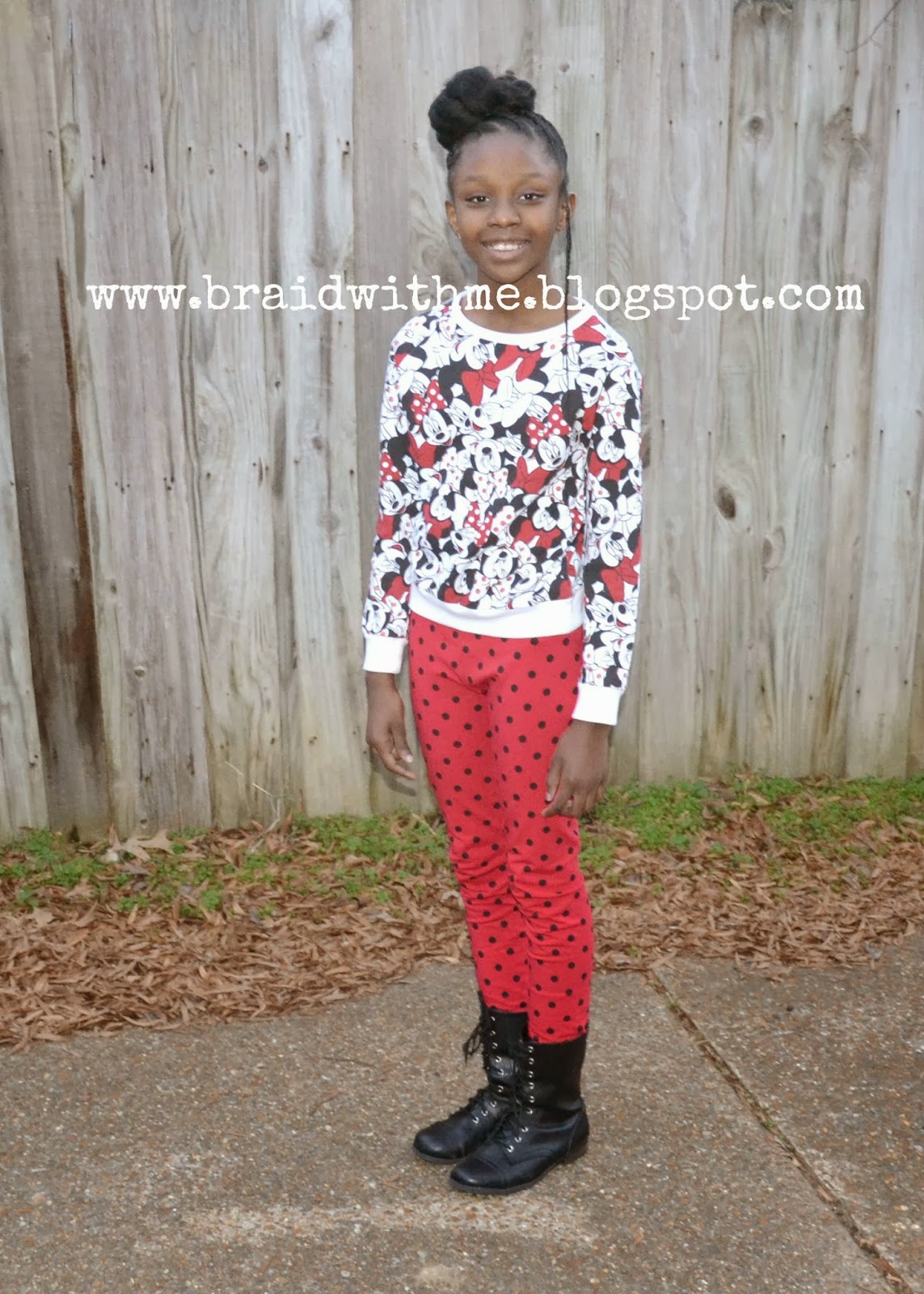 Posted by BraidwithMe at 5:09 PM 6 comments:

We're back with a new style!! It has been such a long time since our last post. Anisa is now a 4th grader!! Where has time gone?? My baby is growing up! 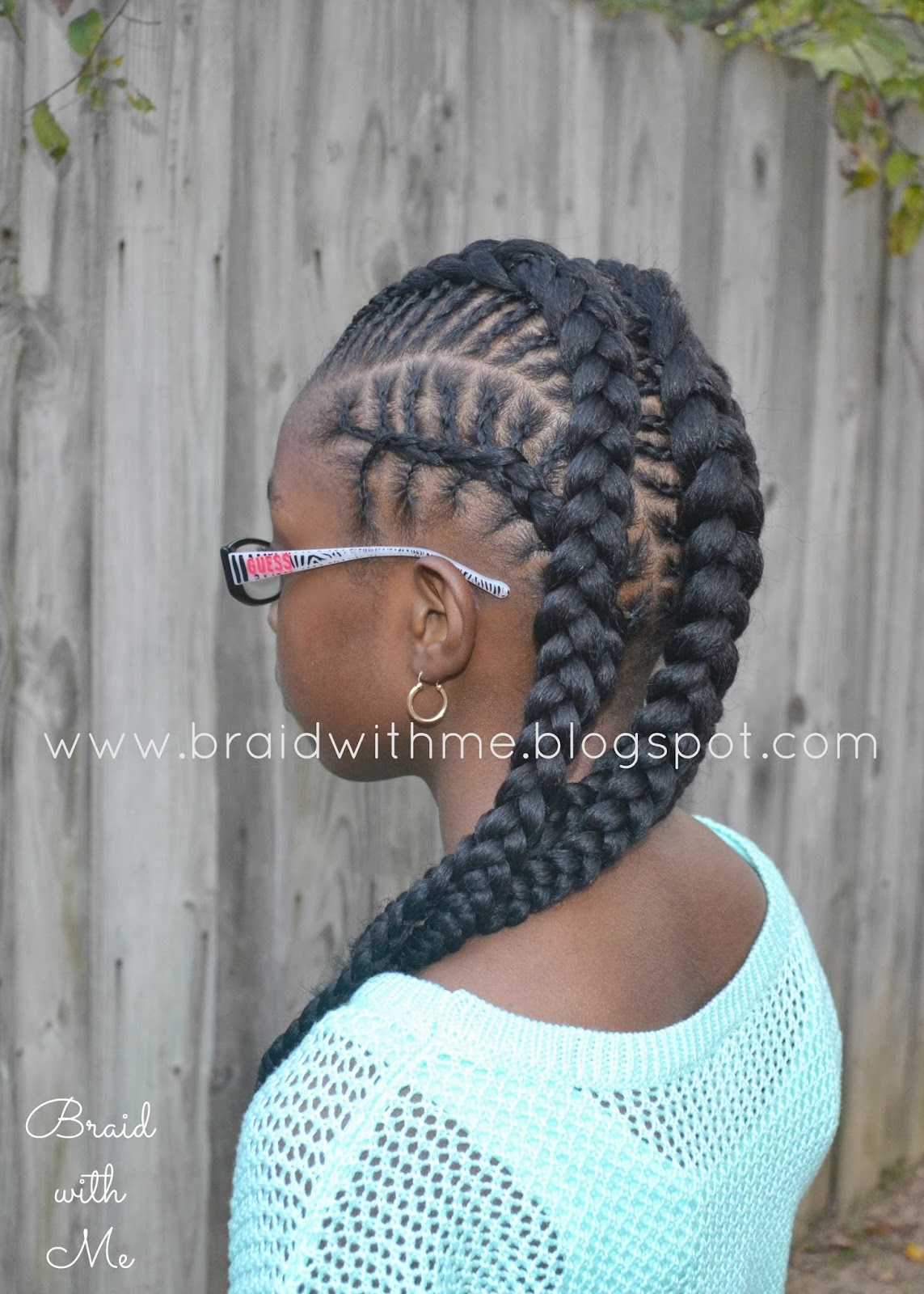 The Style
For this style, I started with hair that was previously styled in several two-strand twist ponytails. I sectioned her hair into four sections, two on each side of her head. Next, I began parting and braiding her hair in a fish bone style. 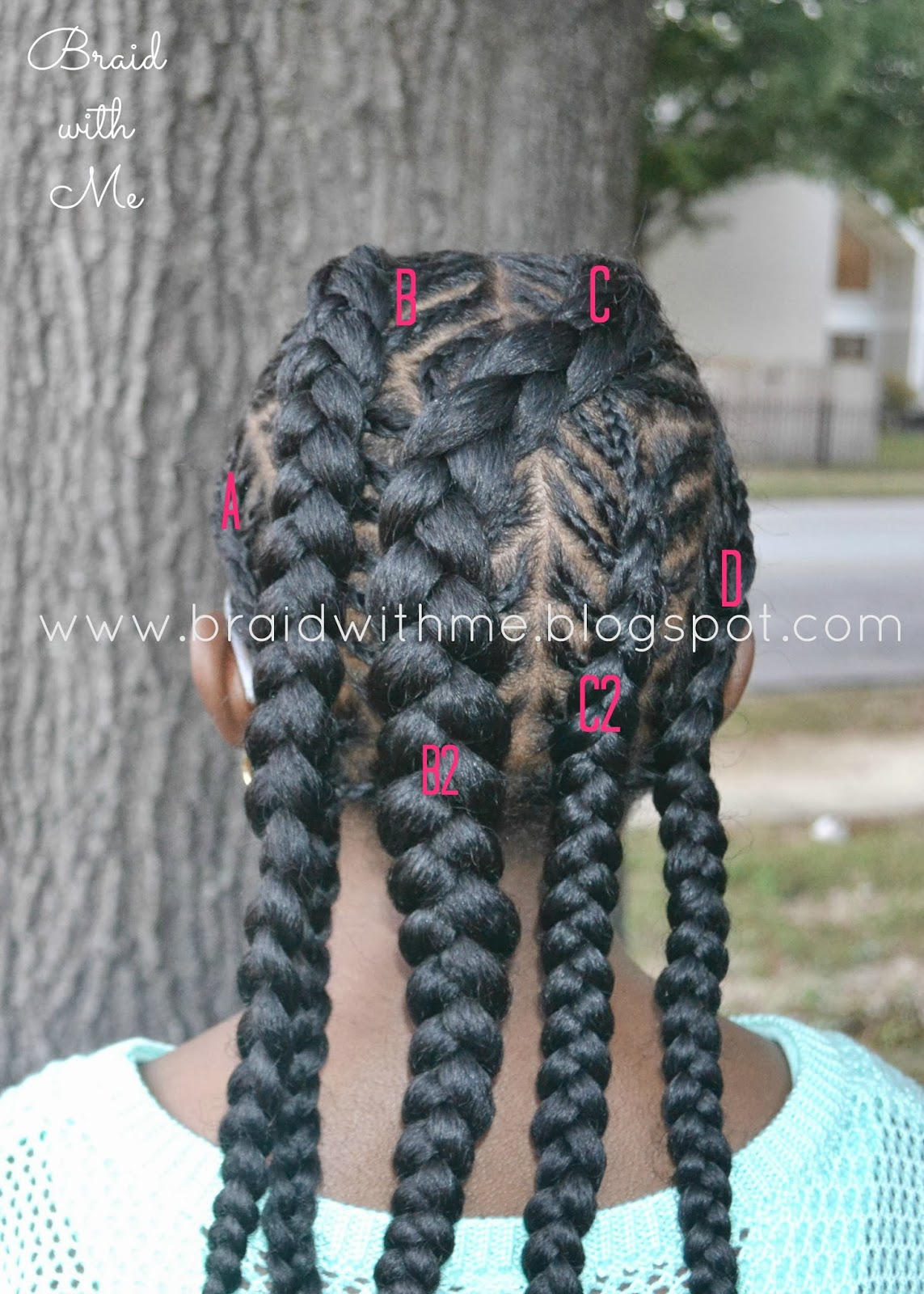 This style can be worn straight to the back or to the side. You also have the option to pin it up into a cute bun. 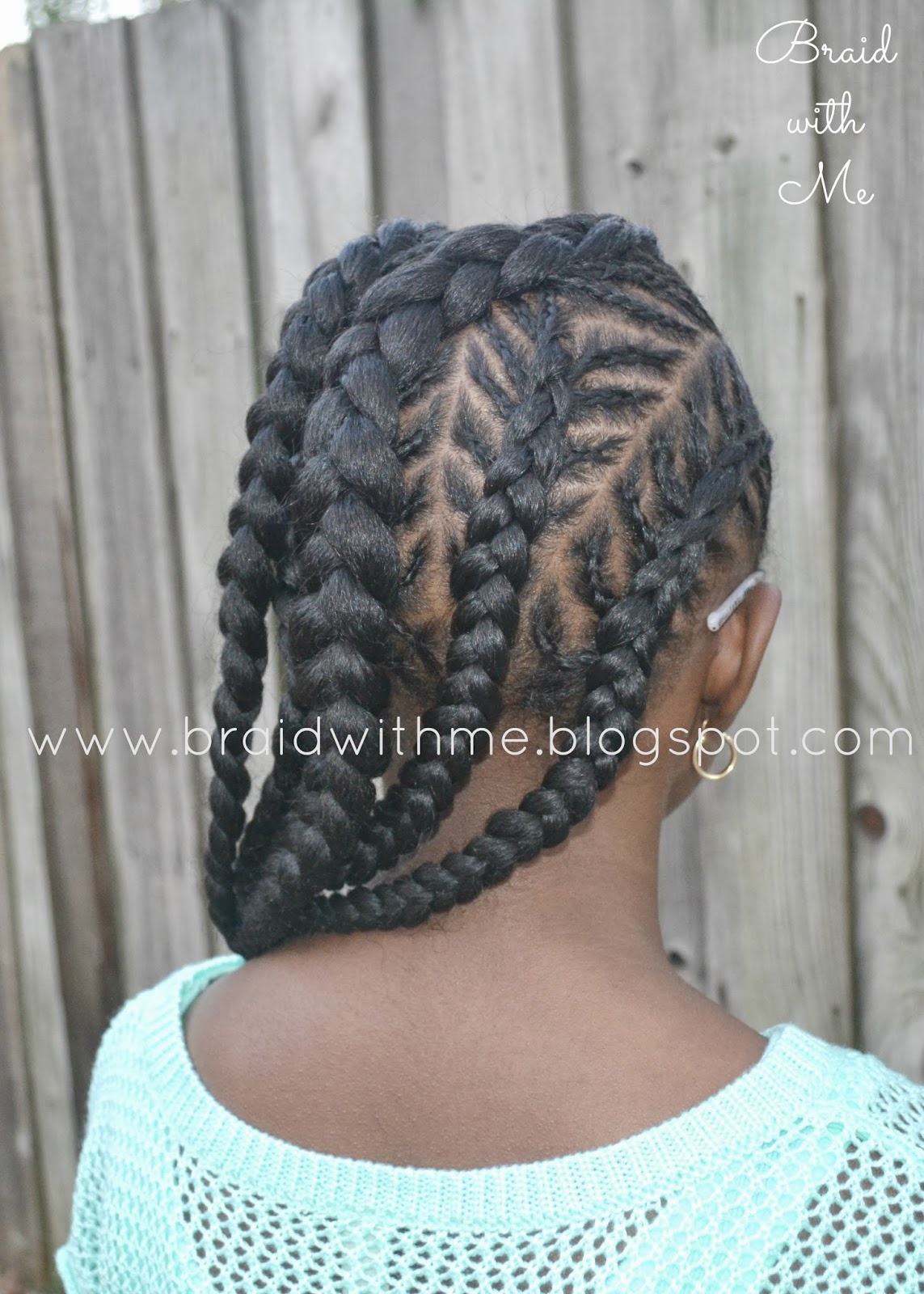 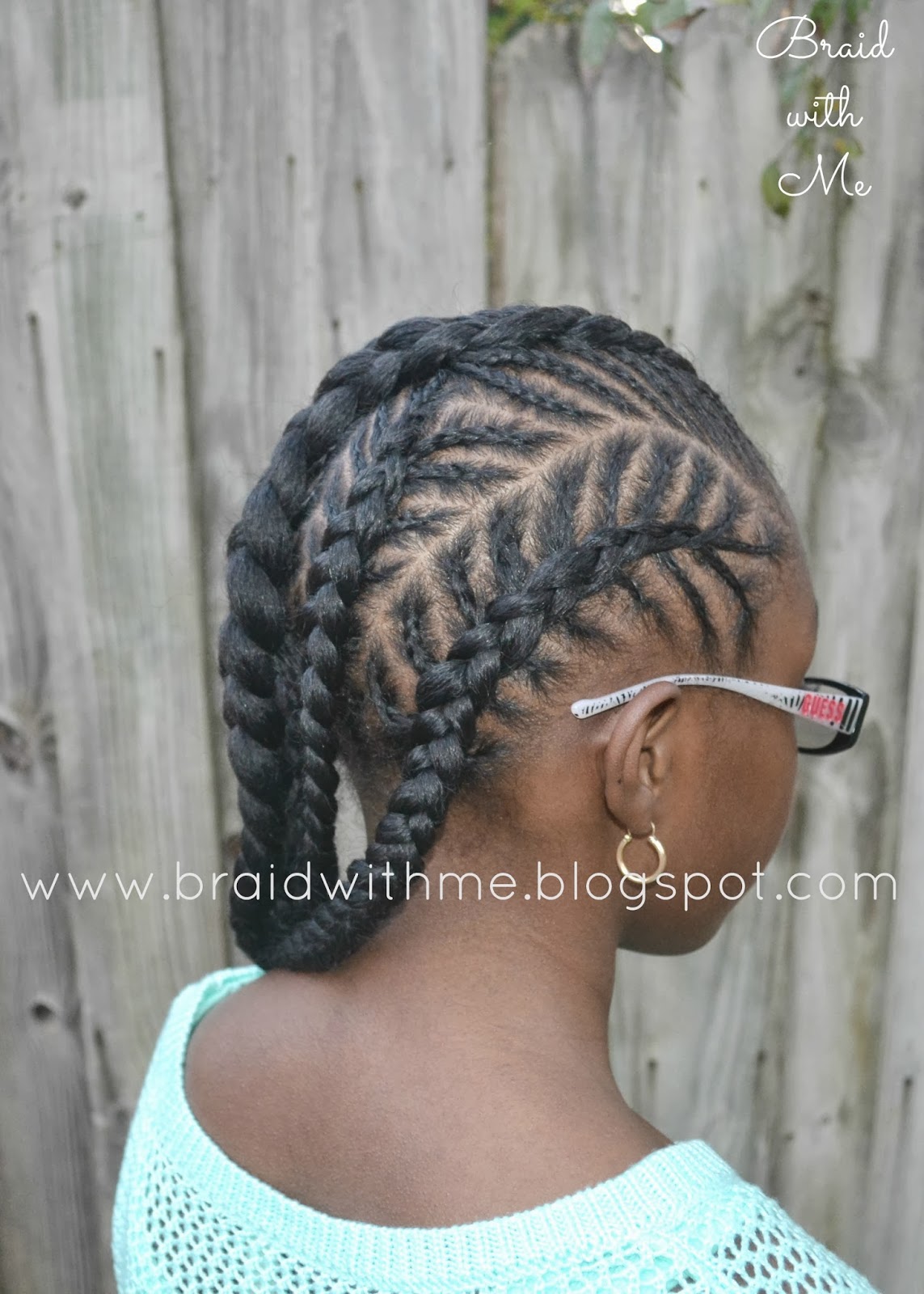 FAQs
How long did it take? I did not complete this style in one sitting. I began braiding and took several breaks.

How long will this style last? This style should last for awhile with proper care. However, she has school pictures coming up soon so she will get a new style.

What will you do to preserve this style? Anisa will protect her hair each night with a satin bonnet. I will also moisturize her hair with a water and olive oil mixture that I have in a spray bottle. I will also use the As I Am Leave-In Conditioner as needed. 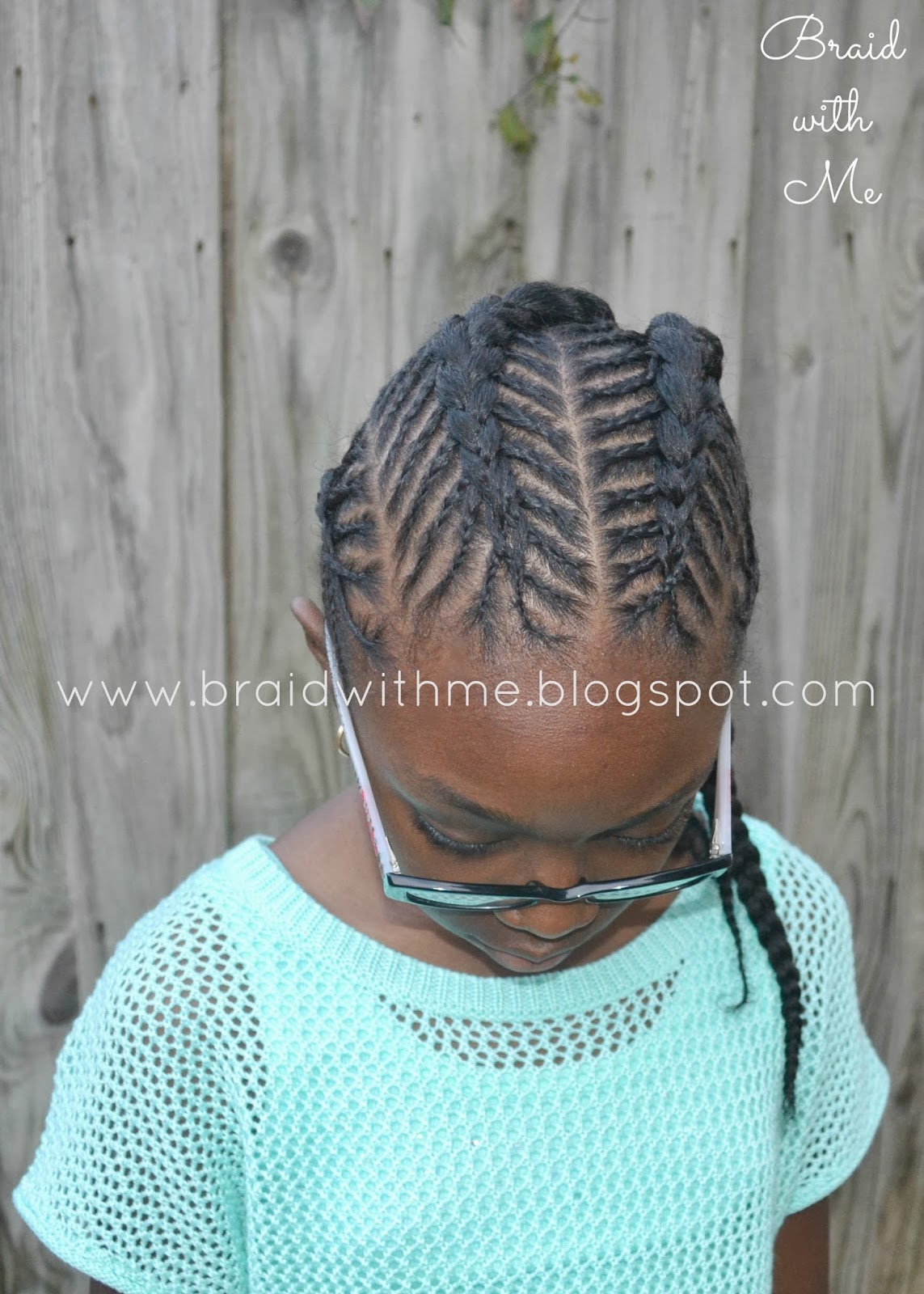 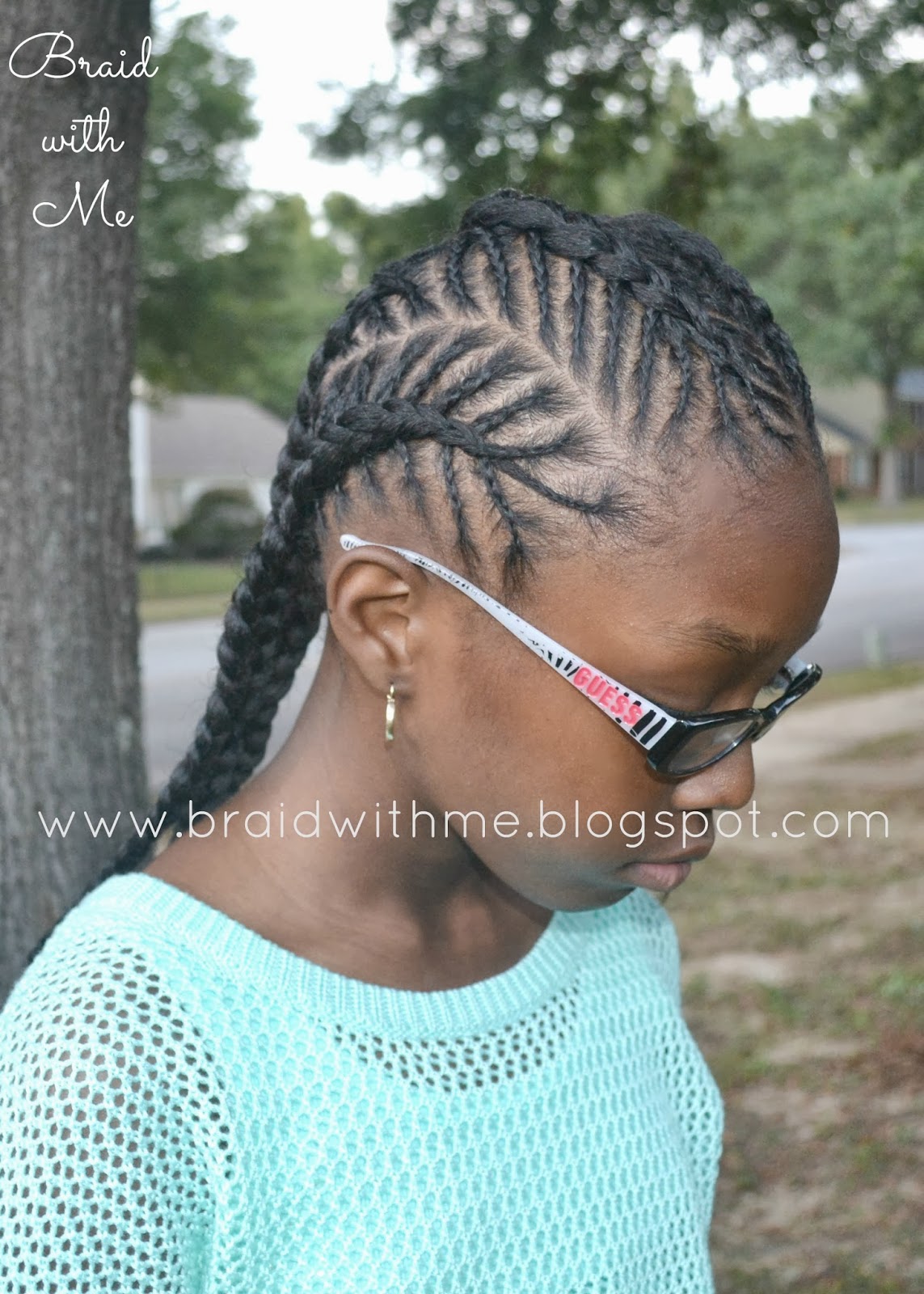 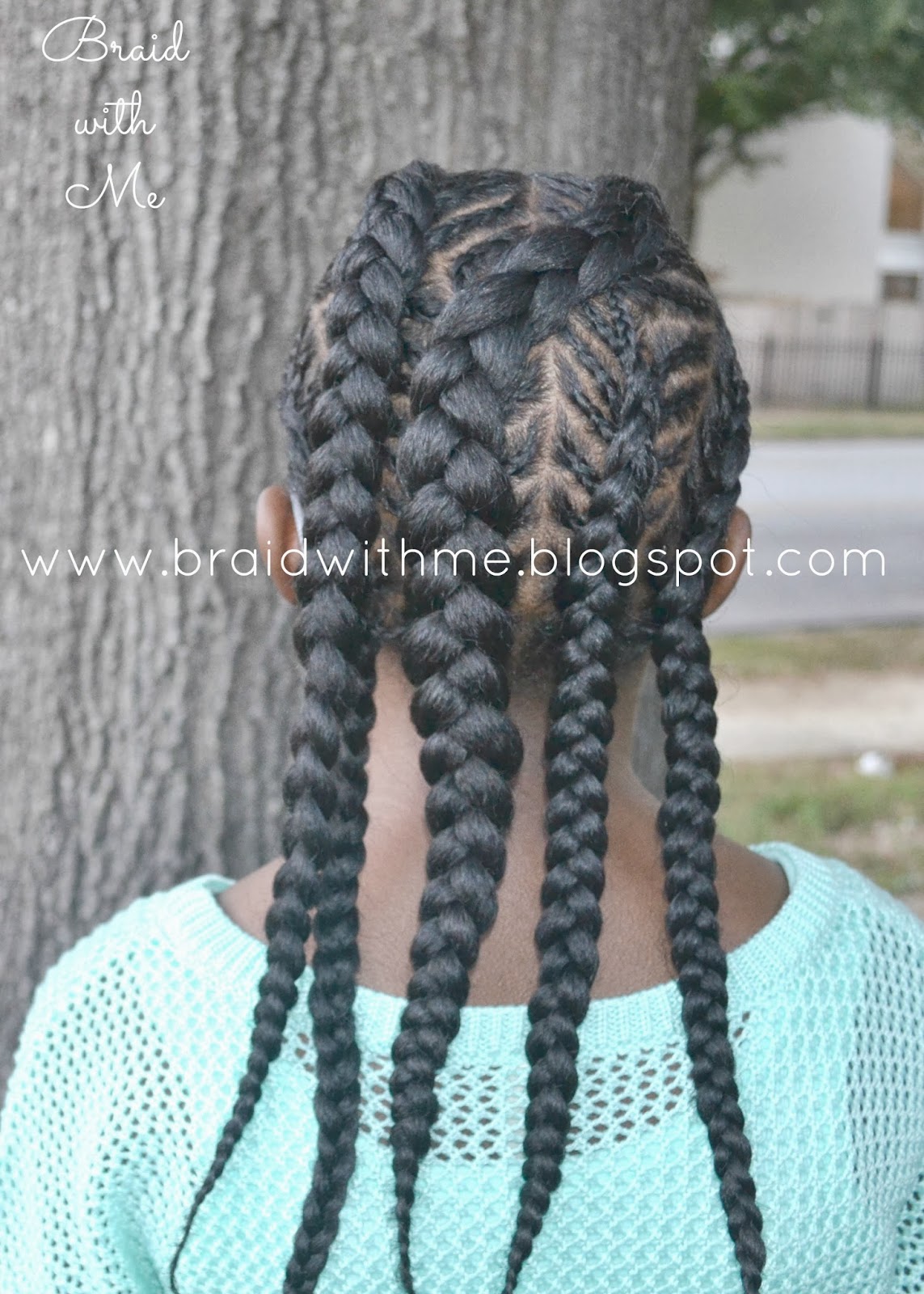 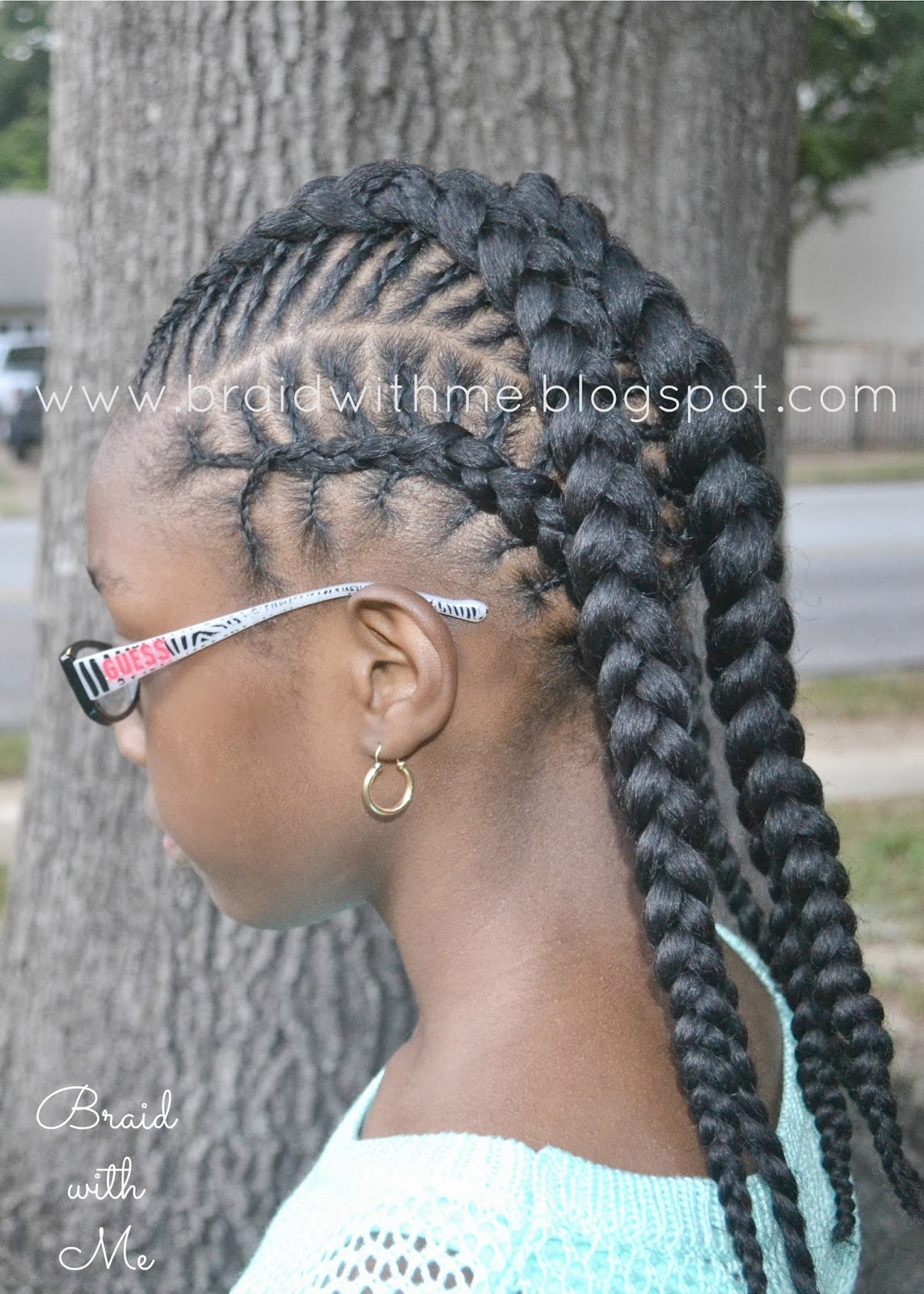 If you're not familiar with fish bone cornrows, check out this tutorial that we did when Anisa was only 6 years old. She is really growing up! It's sad, but I am blessed to be able to experience this with her. 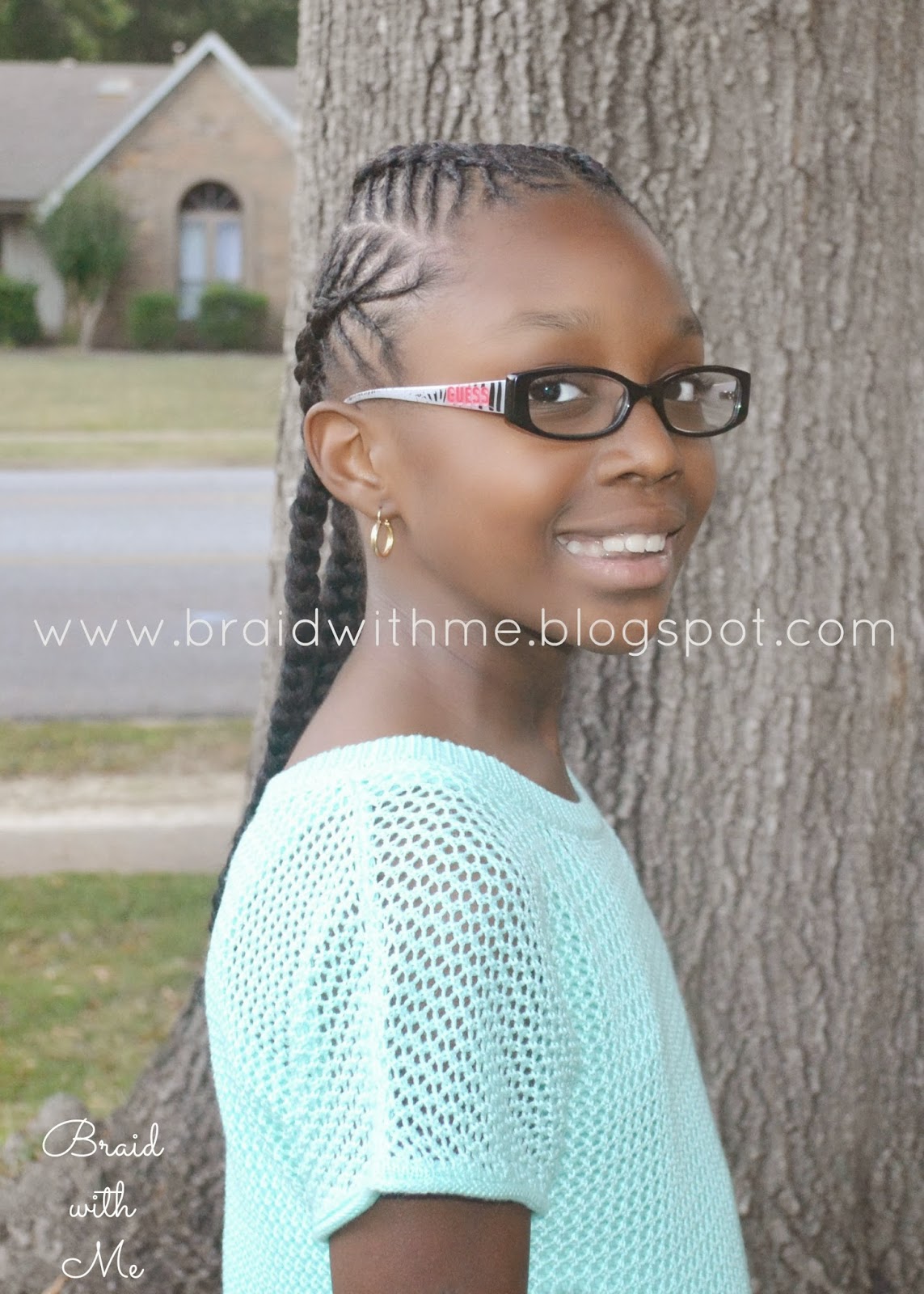 Let us know what you think about this style by leaving a comment below. Also, is there a style that you would like for me to recreate or try? Let us know. I'm always open to new ideas!
Posted by BraidwithMe at 11:47 AM 4 comments:

Welcome, take a seat and Braid with Me!

Promote Your Page Too

BraidwithMe
Many of you may be familiar with my work from www.beadbraidsbeyond.blogspot.com where I had the pleasure of being a guest blogger. With the help Nikki and other supporters I decided to create a blog of my own. I will showcase some of my styles and provide step-by-step tutorials while I continue to learn about the world of natural hair.